United States Trade Deficit Drops Sharply, Are We In A Recovery Period? 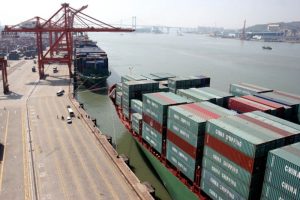 New reports show that the United States trade deficit shrunk dramatically in February, with overseas customers scooping up American products and services by the bushel. This is a sure sign that US factories are starting to benefit from economic stability around the world.

More specifically, the trade gap in goods and services fell 9.6 percent in February against the previous month, to hit a seasonally adjusted $43.56 billion, according to a statement made by the Commerce Department, on Tuesday. In addition, imports fell about 1.8 percent but exports grew, overall, by 0.2 percent.

Another way to look at it is to take the perspective of the United States Commerce Department. The agency said that the value of exports eked its way up by 0.2 percent—to reach $192.9 billion, last month—in comparison to $192.5 billion in January.

Again, even this slight shift is a good sign that the global economy is stabilizing.  Accounting for inflation, exports of American goods—everything from farm equipment to pharmaceutical supplies—reached their highest level on record. Overall, exports have grown more than 7 percent on the year when compared to the same period, from one year ago.

Approaching the end of the first fiscal quarter of 2017 economic growth remains sluggish, though economists report this is typically a result of such a persistent trade deficit. Growth, however, is expected to rebound through the next quarter, mostly because of the recent growth in exports; which means that factories can hire more workers and produce more goods in order to meet the increased global demand.

Capital Economics chief US economist Paul Ashworth notes, “As things stand now, the monthly data point to a 3.0% annualized gain in real exports in the first quarter and a more modest 2.0% increase in real imports.”

As such, he forecast that first quarter Gross Domestic Product growth will hit 1.7 percent, which is still down from the 2.1 of fourth quarter, 2016.

He also goes on to say, “As a result, we expect net external demand to make a modest positive contribution to overall GDP growth, which we estimate was around 1.7%.”

The US trade deficit with China has fallen 4.9 percent while the gap with Mexico shot up 46 percent.  The trade gap with Canada fell 38.1 percent; with the European Union down 18.6 percent and with Germany down 9.2 percent.