The Case Against the Pink Slime 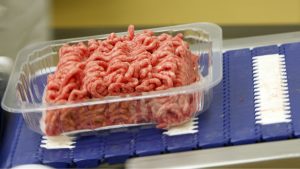 A meat processing company has filed a lawsuit in South Dakota over claims that an ABC News Reporting story qualifies as libel. In this report, the news agency called a product made by Beef Products Inc (BPI) “pink slime.”

BPI is now saying that the ABC should be considered a “disinformation campaign,” and that this effort has resulted in the meat processor’s revenue dropping by 80 percent. As such, BPI is suing ABC for upwards of $5.7 billion, in damages.

At a hearing in January, a BPI lawyer told the judge that the ABC story is “fake news.” And in this report, court documents list that ABC’s Jim Avila actually spoke the term “pink slime” 137 times.

But what, exactly, is pink slime?

BPI explains that the product—which, again, they call “lean, finely-textured beef”—contains beef trimmings which have been placed in a centrifuge. This process serves to separate the lean meat from the fat; after which, the lean meat is treated with ammonia to remove any bacteria. The term was first coined by Gerald Zimstein. The former US Department of Agriculture scientist originally used the term in an email to his colleagues, in 2002.

These processed trimmings were once commonly found in fast-food beef patties served at franchises like Burger King, McDonald’s, and Taco Bell. It was also common to beef products sold in grocery stores, many of which stopped selling the products after the initial airing of the ABC report. And, after the report, BPI—whose primary revenue comes from manufacturing and selling the beef trimmings product—closed three of its four production facilities.

Of course, ABC lawyers argue that the report is protected under the First Amendment of the United States Constitution, which ensures freedom of speech and, more importantly, free press. The network—which is owned by the Walt Disney Company, if you didn’t know—is arguing that BPI has to prove that ABC’s reporters acted deliberately, with “actual malice” in order to harm the company’s reputation.

Cattle Buyers Weekly publisher, Steve Kay, opines that ABC’s story “by most standards of responsible journalism [appears] to be distorted and biased and extremely unreasonable.”

In response, ABC lawyer Kevin Baine comments, “We believe in the principle that people deserve to know what’s in the food they eat and are confident that when all the facts are presented in court, ABC’s reporting will be fully vindicated.”

TheStreet Upgrades Boston Properties to “B”

Metsä Board Oyj Upgraded by Danske to “Buy”