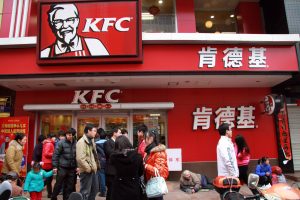 Customers in Hangzhou’s KFC outlet will soon be able to able to pay for food and drinks using technology that only requires them to smile. The facial recognition system known as ‘Smile to Pay’ is part of a Yum China Holdings effort to entice the youth market as the company tries to grow revenues in the second biggest economy in the world.

Yum China Holdings was spun off from Yum Brands, a firm based in the United States. In China Yum is the biggest fast food chain with more than 7,685 outlets. The KFC brand has proved popular in China and there has been an improvement in same-store sales mostly because of it.

The Hangzhou outlet making use of ‘Smile to Pay’ technology is known as KPRO and is targeting the demographic that is expected to form the bulk of consumption growth in the next ten years in China. According to the president of Yum China, Joey Wat, the youth demographic is tech savvy and is keen to try out new innovations and tastes.

Ant Financial, an affiliate of Chinese online retail giant Alibaba, has developed the facial recognition technology for the Hangzhou store which is the first of its kind in the world. To pay diners are required to scan their faces when they get to an ordering kiosk. They then need to ensure a mobile phone number as a security measure.

The facial recognition system also employs algorithms which are capable of detecting shadows for instance in order to determine whether whoever is facing the camera is a real person and not a video or a photo aimed at fooling the system.

Ant Financial’s new payment system uses Face++ technology which has been developed by Megvii, a startup based in Beijing. Other firms that use the Face++ technology in China include ride-hailing service, Didi Chuxing, which uses it in verifying its drivers’ identities.

Currently Alipay dominates mobile payments in China with more than 50% of the $5.5 trillion passing through its hands. The ‘Smile to Pay’ feature was first demonstrated by the chairman and founder of Alibaba, Jack Ma, two years ago in Hanover, Germany.

The Timken Company Given Average Rating of “Moderate Buy” by Analysts