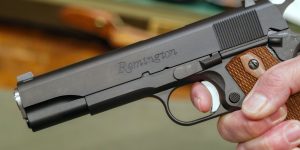 Remington Outdoor, the oldest gun maker in the United States, has as a result of slumping sales filed for bankruptcy. The company which was started more than two centuries ago made the move in order to reach an agreement with creditors. According to the chief financial officer of Remington, sales at the firm fell significantly in the 12 months prior to the bankruptcy.

Last month the gun maker disclosed that it had reached an agreement with creditors where around $700 million of the nearly $1 billion debt load would be written off. Despite all signs showing that it would be heading to bankruptcy, executives of the company maintained then that the problems facing the gun maker would be solved.

“We have an outstanding collection of brands and products, the unqualified support of a vibrant community across the industry, and a deep and powerful culture. We will emerge from this process … to compete more aggressively and to seize future growth opportunities,” saidthe chief executive officer of Remington, Anthony Acitelli, at the time.

Per court documents the bankruptcy lenders of Remington include Deutsche Bank, JPMorgan Chase, Wells Fargo and Bank of America. The gun maker expects to be out of the Chapter 11 bankruptcy filing in the next few months.

According to Remington the firm’s financial troubles started after heavy borrowing with a view to increasing production two years ago as it was anticipated there would be greater industry demand. This was based on the view that Hillary Clinton would be elected president and as a Democrat she would pursue policies that were unfriendly to the gun industry. However that did not pan out as expected and instead Donald Trump, a strong supporter of the Second Amendment and gun ownership, was elected. The expected high demand for guns consequently did not materialize and the sector found itself with an oversupply and higher debt levels.

Running out of cash

Earlier in the year Remington had indicated that it had nearly exhausted its cash reserves and the gun maker intends to use the loans to meet its corporate expenses and this includes the payroll. Besides the financial institutions bondholders of Remington are also offering part of the Chapter 11 loan and they will get an interest in the firm once it exits bankruptcy.

In the court documents Remington also listed emerging risks to the industry and this includes the gun sales restrictions made by retailers that include Kroger, Dick’s Sporting Goods and Walmart. Last year per the court documents, 11% of the sales that Remington generated were made at Walmart.