Complete the form below to receive the latest headlines and analysts' recommendations for Century Aluminum with our free daily email newsletter:

Wall Street analysts expect Century Aluminum Co (NASDAQ:CENX) to post earnings of ($0.14) per share for the current quarter, according to Zacks. Two analysts have made estimates for Century Aluminum’s earnings, with estimates ranging from ($0.16) to ($0.11). Century Aluminum posted earnings per share of ($0.43) in the same quarter last year, which suggests a positive year-over-year growth rate of 67.4%. The firm is scheduled to report its next quarterly earnings results on Thursday, February 20th.

According to Zacks, analysts expect that Century Aluminum will report full year earnings of ($1.43) per share for the current year. For the next financial year, analysts expect that the firm will report earnings of $0.52 per share, with EPS estimates ranging from $0.18 to $0.86. Zacks Investment Research’s earnings per share averages are a mean average based on a survey of sell-side analysts that cover Century Aluminum.

Century Aluminum (NASDAQ:CENX) last issued its quarterly earnings results on Tuesday, November 5th. The industrial products company reported ($0.39) earnings per share (EPS) for the quarter, missing the Thomson Reuters’ consensus estimate of ($0.30) by ($0.09). Century Aluminum had a negative return on equity of 22.27% and a negative net margin of 7.47%. The company had revenue of $438.00 million for the quarter, compared to analysts’ expectations of $459.07 million. During the same quarter in the previous year, the business earned $0.02 EPS. The company’s revenue for the quarter was down 9.1% on a year-over-year basis.

Separately, BidaskClub upgraded shares of Century Aluminum from a “hold” rating to a “buy” rating in a research note on Wednesday, January 8th. Three analysts have rated the stock with a hold rating and two have issued a buy rating to the company. The stock currently has an average rating of “Hold” and a consensus target price of $11.33.

Century Aluminum Company, together with its subsidiaries, produces standard-grade and value-added primary aluminum products in the United States and Iceland. The company was founded in 1995 and is headquartered in Chicago, Illinois.

Recommended Story: How prevalent are 12b-1 fees? 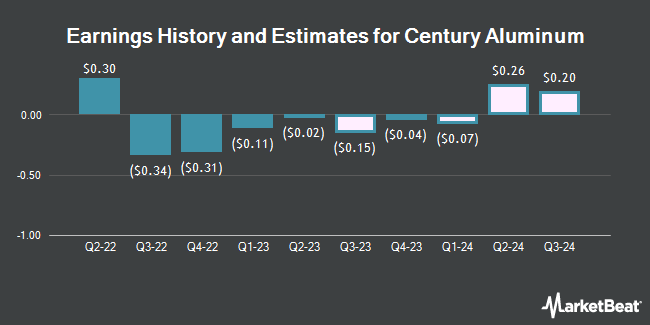