Complete the form below to receive the latest headlines and analysts' recommendations for Ark Restaurants with our free daily email newsletter:

Dalton Greiner Hartman Maher & Co. grew its stake in shares of Ark Restaurants Corp (NASDAQ:ARKR) by 2.9% during the fourth quarter, according to the company in its most recent disclosure with the SEC. The fund owned 294,496 shares of the restaurant operator’s stock after buying an additional 8,248 shares during the quarter. Dalton Greiner Hartman Maher & Co. owned approximately 0.08% of Ark Restaurants worth $6,623,000 as of its most recent SEC filing.

Separately, BlackRock Inc. grew its stake in shares of Ark Restaurants by 9.0% during the second quarter. BlackRock Inc. now owns 10,932 shares of the restaurant operator’s stock worth $224,000 after buying an additional 904 shares during the last quarter. Institutional investors own 25.55% of the company’s stock.

The business also recently announced a quarterly dividend, which was paid on Tuesday, January 7th. Shareholders of record on Monday, December 16th were paid a dividend of $0.25 per share. The ex-dividend date was Friday, December 13th. This represents a $1.00 dividend on an annualized basis and a dividend yield of 4.63%.

Ark Restaurants Corp., through its subsidiaries, owns and operates restaurants and bars in the United States. As of September 29, 2018, it owned and/or operated 20 restaurants and bars, including 5 facilities located in New York City; 2 in Washington, DC; 5 in Las Vegas, Nevada; 3 in Atlantic City, New Jersey; 1 in the Faneuil Hall Marketplace in Boston, Massachusetts; 2 on the east coast of Florida; and 2 on the gulf coast of Alabama, as well as had 19 fast food concepts and catering operations.

Featured Story: What is a Derivative?

Want to see what other hedge funds are holding ARKR? Visit HoldingsChannel.com to get the latest 13F filings and insider trades for Ark Restaurants Corp (NASDAQ:ARKR). 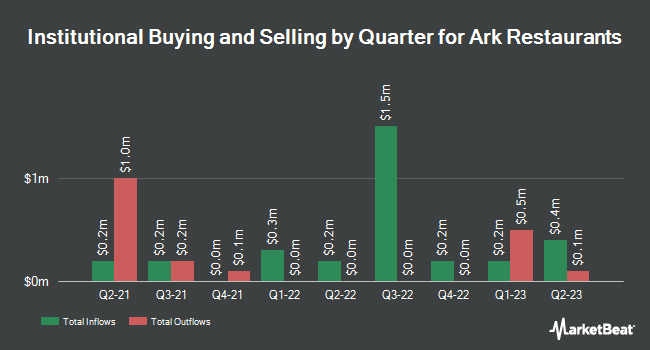