Complete the form below to receive the latest headlines and analysts' recommendations for RGC Resources with our free daily email newsletter:

Dalton Greiner Hartman Maher & Co. boosted its holdings in shares of RGC Resources Inc. (NASDAQ:RGCO) by 4.6% in the fourth quarter, HoldingsChannel reports. The fund owned 132,589 shares of the energy company’s stock after acquiring an additional 5,784 shares during the period. Dalton Greiner Hartman Maher & Co.’s holdings in RGC Resources were worth $3,789,000 as of its most recent SEC filing.

RGC Resources (NASDAQ:RGCO) last issued its quarterly earnings results on Friday, November 15th. The energy company reported $0.06 earnings per share (EPS) for the quarter, missing analysts’ consensus estimates of $0.08 by ($0.02). The business had revenue of $9.85 million for the quarter, compared to analysts’ expectations of $10.60 million. RGC Resources had a net margin of 12.79% and a return on equity of 10.43%. Research analysts expect that RGC Resources Inc. will post 1.13 earnings per share for the current fiscal year.

The company also recently announced a dividend, which will be paid on Saturday, February 1st. Shareholders of record on Wednesday, January 15th will be issued a $0.175 dividend. The ex-dividend date of this dividend is Tuesday, January 14th. This is a boost from RGC Resources’s previous dividend of $0.17.

Separately, ValuEngine raised shares of RGC Resources from a “hold” rating to a “buy” rating in a research report on Friday, January 3rd.

RGC Resources, Inc, through its subsidiaries, operates as an energy services company. The company sells and distributes natural gas to residential, commercial, and industrial customers in Roanoke, Virginia, and the surrounding localities. It also provides various unregulated services. The company operates approximately 1,141 miles of transmission and distribution pipeline; and a liquefied natural gas storage facility, as well as owns and operates 8 metering stations.

Read More: What is the outlook for the FAANG stocks?

Want to see what other hedge funds are holding RGCO? Visit HoldingsChannel.com to get the latest 13F filings and insider trades for RGC Resources Inc. (NASDAQ:RGCO). 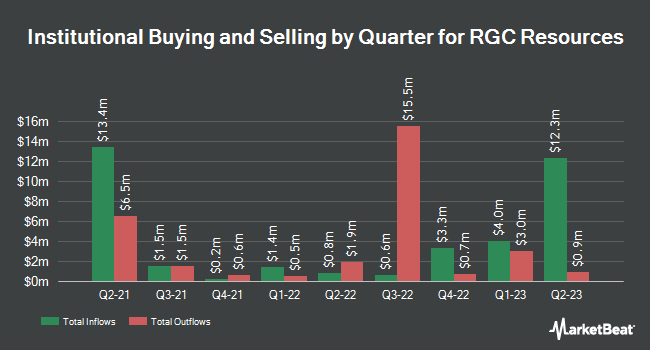