Complete the form below to receive the latest headlines and analysts' recommendations for Tilray with our free daily email newsletter:

Thrivent Financial for Lutherans purchased a new position in Tilray Inc (NASDAQ:TLRY) during the first quarter, according to its most recent 13F filing with the Securities and Exchange Commission. The firm purchased 50,028 shares of the company’s stock, valued at approximately $344,000.

Tilray (NASDAQ:TLRY) last issued its earnings results on Monday, May 11th. The company reported ($1.73) earnings per share for the quarter, missing the Zacks’ consensus estimate of ($0.44) by ($1.29). The company had revenue of $52.20 million for the quarter, compared to the consensus estimate of $49.37 million. Tilray had a negative return on equity of 62.82% and a negative net margin of 241.79%. Tilray’s revenue was up 127.0% compared to the same quarter last year. During the same quarter in the prior year, the company posted ($0.27) EPS. On average, sell-side analysts anticipate that Tilray Inc will post -0.9 earnings per share for the current year. 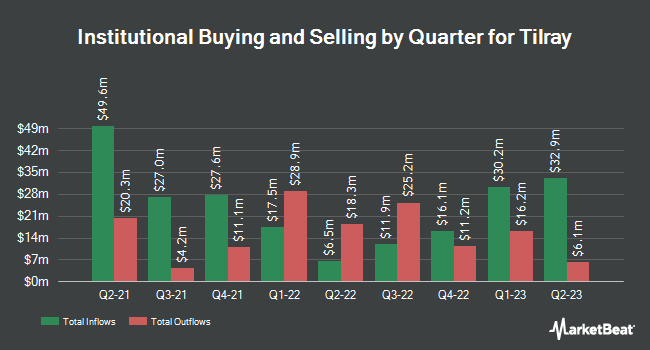 Receive News & Ratings for Tilray Daily - Enter your email address below to receive a concise daily summary of the latest news and analysts' ratings for Tilray and related companies with MarketBeat.com's FREE daily email newsletter.