Complete the form below to receive the latest headlines and analysts' recommendations for Astec Industries with our free daily email newsletter:

Assenagon Asset Management S.A. acquired a new stake in shares of Astec Industries, Inc. (NASDAQ:ASTE) in the second quarter, according to its most recent 13F filing with the Securities and Exchange Commission. The firm acquired 5,414 shares of the industrial products company’s stock, valued at approximately $251,000.

Astec Industries (NASDAQ:ASTE) last posted its quarterly earnings data on Wednesday, May 6th. The industrial products company reported $1.00 earnings per share (EPS) for the quarter, topping analysts’ consensus estimates of $0.39 by $0.61. The company had revenue of $288.80 million for the quarter, compared to the consensus estimate of $291.53 million. Astec Industries had a net margin of 2.53% and a return on equity of 6.99%. The company’s revenue was down 11.4% on a year-over-year basis. As a group, research analysts predict that Astec Industries, Inc. will post 1.3 EPS for the current fiscal year.

Want to see what other hedge funds are holding ASTE? Visit HoldingsChannel.com to get the latest 13F filings and insider trades for Astec Industries, Inc. (NASDAQ:ASTE). 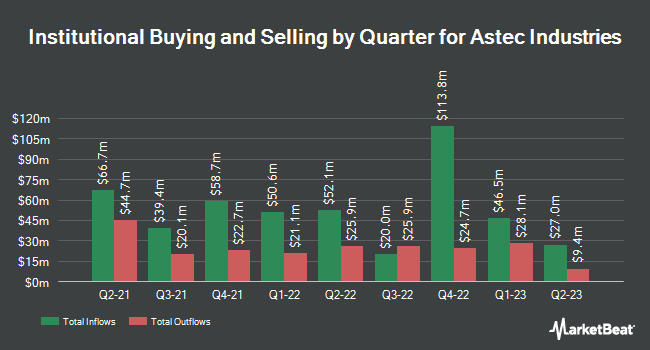