Complete the form below to receive the latest headlines and analysts' recommendations for Diodes with our free daily email newsletter:

Shares of Diodes Incorporated (NASDAQ:DIOD) have been assigned an average rating of “Buy” from the eight ratings firms that are covering the firm, MarketBeat.com reports. Three equities research analysts have rated the stock with a hold rating and five have given a buy rating to the company. The average 12-month price objective among analysts that have covered the stock in the last year is $53.60.

Diodes (NASDAQ:DIOD) last posted its quarterly earnings results on Monday, May 11th. The semiconductor company reported $0.46 EPS for the quarter, missing the consensus estimate of $0.48 by ($0.02). The firm had revenue of $280.70 million during the quarter, compared to analyst estimates of $286.00 million. Diodes had a net margin of 11.54% and a return on equity of 12.52%. The company’s revenue was down 7.1% on a year-over-year basis. During the same period last year, the company earned $0.69 EPS. On average, analysts expect that Diodes will post 2.12 earnings per share for the current fiscal year.

Diodes Incorporated, together with its subsidiaries, designs, manufactures, and supplies application-specific standard products in the discrete, logic, and analog and mixed-signal semiconductor markets in Asia, North America, and Europe. It primarily focuses on low pin count semiconductor devices with one or more active or passive components.

Read More: The limitations of an equal weight rating 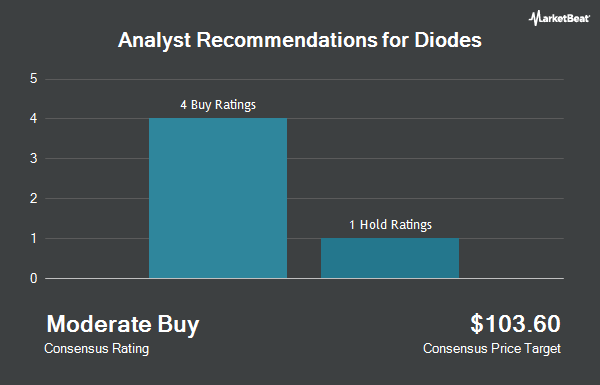 Receive News & Ratings for Diodes Daily - Enter your email address below to receive a concise daily summary of the latest news and analysts' ratings for Diodes and related companies with MarketBeat.com's FREE daily email newsletter.