Complete the form below to receive the latest headlines and analysts' recommendations for Nuance Communications with our free daily email newsletter:

Janney Montgomery Scott LLC cut its stake in shares of Nuance Communications Inc. (NASDAQ:NUAN) by 6.2% during the second quarter, according to the company in its most recent Form 13F filing with the SEC. The firm owned 72,043 shares of the software maker’s stock after selling 4,763 shares during the quarter. Janney Montgomery Scott LLC’s holdings in Nuance Communications were worth $1,823,000 at the end of the most recent reporting period.

Nuance Communications (NASDAQ:NUAN) last posted its quarterly earnings data on Thursday, May 7th. The software maker reported $0.21 EPS for the quarter, topping the Thomson Reuters’ consensus estimate of $0.17 by $0.04. Nuance Communications had a net margin of 9.06% and a return on equity of 12.80%. The business had revenue of $369.55 million during the quarter, compared to the consensus estimate of $351.56 million. During the same period in the previous year, the firm posted $0.29 earnings per share. The business’s revenue for the quarter was up 9.7% compared to the same quarter last year. On average, sell-side analysts expect that Nuance Communications Inc. will post 0.45 EPS for the current year.

Nuance Communications (NASDAQ: NUAN) is the pioneer and leader in conversational AI innovations that bring intelligence to everyday work and life. The company delivers solutions that understand, analyze, and respond to people – amplifying human intelligence to increase productivity and security. With decades of domain and AI expertise, Nuance works with thousands of organizations globally across healthcare, financial services, telecommunications, government, and retail – to create stronger relationships and better experiences for their customers and workforce. 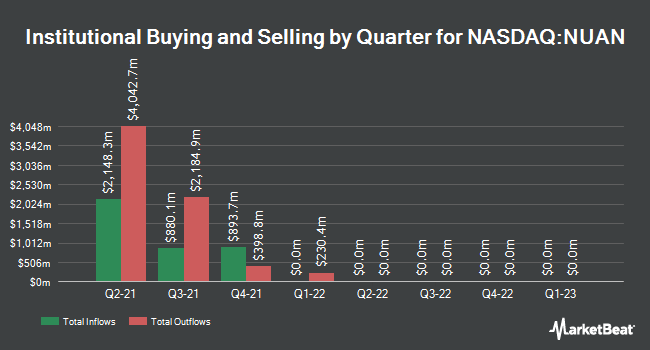