Complete the form below to receive the latest headlines and analysts' recommendations for Cohen & Steers with our free daily email newsletter:

SG Americas Securities LLC lifted its position in shares of Cohen & Steers, Inc. (NYSE:CNS) by 24.8% during the 2nd quarter, according to its most recent disclosure with the SEC. The firm owned 12,919 shares of the asset manager’s stock after buying an additional 2,565 shares during the period. SG Americas Securities LLC’s holdings in Cohen & Steers were worth $879,000 as of its most recent SEC filing.

Separately, Bank of America raised shares of Cohen & Steers from an “underperform” rating to a “neutral” rating and set a $54.00 price target on the stock in a research note on Friday, April 24th.

Cohen & Steers (NYSE:CNS) last posted its quarterly earnings results on Wednesday, July 22nd. The asset manager reported $0.54 earnings per share for the quarter, topping the Zacks’ consensus estimate of $0.53 by $0.01. The company had revenue of $94.09 million for the quarter. Cohen & Steers had a net margin of 29.19% and a return on equity of 54.10%. Research analysts forecast that Cohen & Steers, Inc. will post 2.31 earnings per share for the current fiscal year.

Cohen & Steers, Inc is a publicly owned asset management holding company. Through its subsidiaries, the firm provides its services to institutional investors, including pension funds, endowments, and foundations. It manages separate client-focused equity, fixed income, multi-asset, and commodity portfolios through its subsidiaries. 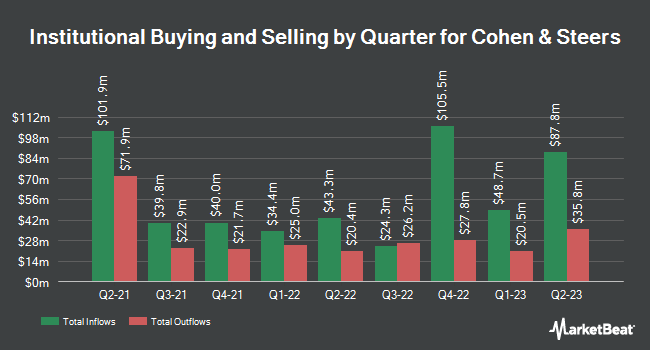