Acadian Asset Management LLC cut its holdings in Vanda Pharmaceuticals Inc. (NASDAQ:VNDA) by 4.0% during the 1st quarter, according to its most recent Form 13F filing with the Securities and Exchange Commission. The firm owned 952,477 shares of the biopharmaceutical company’s stock after selling 39,202 shares during the period. Acadian Asset Management LLC owned 1.71% of Vanda Pharmaceuticals worth $14,304,000 as of its most recent SEC filing.

In other Vanda Pharmaceuticals news, insider Aranthan Jones II sold 18,000 shares of Vanda Pharmaceuticals stock in a transaction on Monday, March 15th. The shares were sold at an average price of $17.72, for a total value of $318,960.00. Following the completion of the transaction, the insider now directly owns 111,935 shares of the company’s stock, valued at approximately $1,983,488.20. The sale was disclosed in a filing with the Securities & Exchange Commission, which is accessible through this link. Company insiders own 5.90% of the company’s stock.

Featured Article: What is a back-end load? 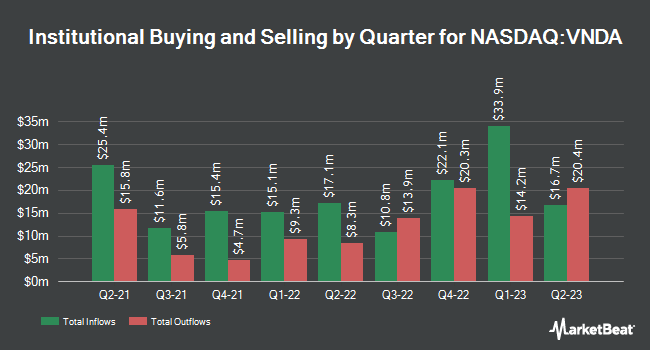 Terreno Realty Co. Given Consensus Rating of “Buy” by Brokerages

Complete the form below to receive the latest headlines and analysts' recommendations for Vanda Pharmaceuticals with our free daily email newsletter: