Shares of Enphase Energy, Inc. (NASDAQ:ENPH) have received an average recommendation of “Buy” from the twenty-six analysts that are currently covering the firm, MarketBeat Ratings reports. Eight research analysts have rated the stock with a hold rating and fifteen have issued a buy rating on the company. The average 12-month price objective among brokers that have issued a report on the stock in the last year is $193.28.

Enphase Energy (NASDAQ:ENPH) last issued its earnings results on Tuesday, April 27th. The semiconductor company reported $0.56 earnings per share for the quarter, beating analysts’ consensus estimates of $0.34 by $0.22. The company had revenue of $301.80 million for the quarter, compared to the consensus estimate of $291.83 million. Enphase Energy had a return on equity of 25.37% and a net margin of 11.11%. The firm’s quarterly revenue was up 46.9% on a year-over-year basis. During the same quarter in the prior year, the company earned $0.38 EPS. Equities research analysts anticipate that Enphase Energy will post 1.71 EPS for the current fiscal year.

Enphase Energy, Inc, together with its subsidiaries, designs, develops, manufactures, and sells home energy solutions for the solar photovoltaic industry in the United States and internationally. The company offers semiconductor-based microinverter, which converts energy at the individual solar module level, and combines with its proprietary networking and software technologies to provide energy monitoring and control services. 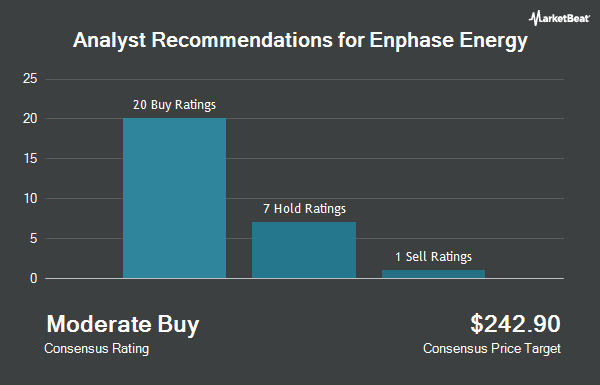 Complete the form below to receive the latest headlines and analysts' recommendations for Enphase Energy with our free daily email newsletter: