Hexcel (NYSE:HXL) last posted its earnings results on Sunday, April 18th. The aerospace company reported ($0.10) earnings per share for the quarter, topping the Zacks’ consensus estimate of ($0.16) by $0.06. Hexcel had a negative net margin of 1.94% and a negative return on equity of 2.80%. The company had revenue of $310.30 million for the quarter, compared to analyst estimates of $300.48 million. During the same quarter in the prior year, the business posted $0.64 EPS. The firm’s revenue was down 42.6% compared to the same quarter last year. Equities analysts forecast that Hexcel Co. will post 0.22 EPS for the current fiscal year.

In related news, insider Thierry Merlot sold 1,580 shares of the company’s stock in a transaction dated Thursday, April 29th. The shares were sold at an average price of $56.26, for a total value of $88,890.80. Following the sale, the insider now owns 34,025 shares in the company, valued at approximately $1,914,246.50. The transaction was disclosed in a document filed with the Securities & Exchange Commission, which is available at this hyperlink. Corporate insiders own 1.39% of the company’s stock.

Hexcel Corporation, together with its subsidiaries, develops, manufactures, and markets structural materials for use in commercial aerospace, space and defense, and industrial markets. It operates in two segments, Composite Materials and Engineered Products. The Composite Materials segment manufactures and markets carbon fibers, fabrics and specialty reinforcements, prepregs and other fiber-reinforced matrix materials, structural adhesives, honeycomb, molding compounds, tooling materials, polyurethane systems, and laminates that are used in military and commercial aircraft, wind turbine blades, recreational products, and other industrial applications, as well as in automotive, marine, and trains.

See Also: What is the Coverage Ratio?

Want to see what other hedge funds are holding HXL? Visit HoldingsChannel.com to get the latest 13F filings and insider trades for Hexcel Co. (NYSE:HXL). 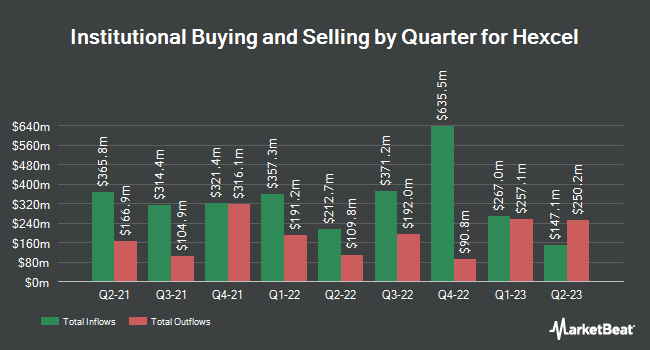 Receive News & Ratings for Hexcel Daily - Enter your email address below to receive a concise daily summary of the latest news and analysts' ratings for Hexcel and related companies with MarketBeat.com's FREE daily email newsletter.

Aurinia Pharmaceuticals Inc. Expected to Announce Earnings of -$0.35 Per Share

Complete the form below to receive the latest headlines and analysts' recommendations for Hexcel with our free daily email newsletter: