Wall Street brokerages expect BioMarin Pharmaceutical Inc. (NASDAQ:BMRN) to announce $434.37 million in sales for the current fiscal quarter, according to Zacks Investment Research. Nine analysts have made estimates for BioMarin Pharmaceutical’s earnings. The highest sales estimate is $456.42 million and the lowest is $413.30 million. BioMarin Pharmaceutical reported sales of $476.78 million in the same quarter last year, which would suggest a negative year-over-year growth rate of 8.9%. The company is expected to issue its next quarterly earnings results on Thursday, November 4th.

According to Zacks, analysts expect that BioMarin Pharmaceutical will report full year sales of $1.86 billion for the current fiscal year, with estimates ranging from $1.83 billion to $1.88 billion. For the next fiscal year, analysts expect that the business will post sales of $2.15 billion, with estimates ranging from $1.84 billion to $2.28 billion. Zacks Investment Research’s sales calculations are a mean average based on a survey of sell-side analysts that follow BioMarin Pharmaceutical.

BioMarin Pharmaceutical (NASDAQ:BMRN) last released its earnings results on Tuesday, July 27th. The biotechnology company reported $0.07 earnings per share (EPS) for the quarter, topping the Zacks’ consensus estimate of ($0.11) by $0.18. BioMarin Pharmaceutical had a net margin of 43.68% and a return on equity of 3.34%. The business had revenue of $501.69 million during the quarter, compared to analyst estimates of $448.84 million.

BioMarin Pharmaceutical, Inc engages in the development and commercialization of therapies for people with serious and life-threatening rare diseases and medical conditions. Its pipeline products include Valoctocogene roxaparvovec, Vosoritide, and BMN 307. The company was founded by John C. Klock, Christopher M. 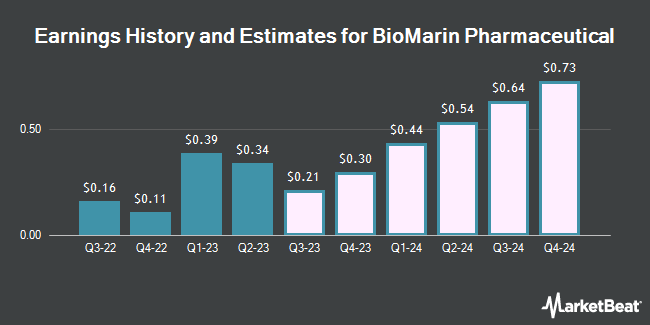 Complete the form below to receive the latest headlines and analysts' recommendations for BioMarin Pharmaceutical with our free daily email newsletter: