Lumentum (NASDAQ:LITE) last released its earnings results on Tuesday, August 17th. The technology company reported $1.15 EPS for the quarter, beating the Thomson Reuters’ consensus estimate of $1.06 by $0.09. The firm had revenue of $392.10 million for the quarter, compared to analysts’ expectations of $382.17 million. Lumentum had a net margin of 22.80% and a return on equity of 20.42%. Lumentum’s quarterly revenue was up 6.5% on a year-over-year basis. During the same quarter last year, the company earned $1.18 EPS. As a group, equities research analysts anticipate that Lumentum will post 4.58 earnings per share for the current year.

Lumentum Holdings, Inc engages in the provision of optical and photonic products. It operates through the Optical Communications (OpComms) and Commercial Lasers segments. The OpComms segment includes a range of components, modules, and subsystems to support customers including carrier networks of access (local), metro (intracity), long-haul (city-to-city and worldwide), and submarine (undersea) applications. 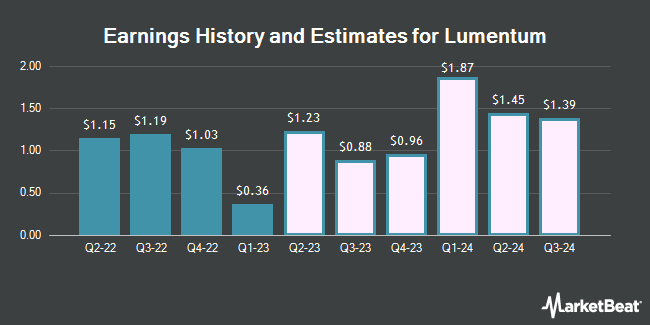 Receive News & Ratings for Lumentum Daily - Enter your email address below to receive a concise daily summary of the latest news and analysts' ratings for Lumentum and related companies with MarketBeat.com's FREE daily email newsletter.

Complete the form below to receive the latest headlines and analysts' recommendations for Lumentum with our free daily email newsletter: