A number of equities research analysts recently weighed in on the stock. JPMorgan Chase & Co. cut their price objective on shares of Ozon from $69.00 to $65.00 and set a “neutral” rating on the stock in a research note on Wednesday, August 18th. Zacks Investment Research cut shares of Ozon from a “hold” rating to a “sell” rating in a research note on Thursday, July 22nd. Finally, HSBC lifted their target price on Ozon from $65.00 to $73.00 and gave the stock a “buy” rating in a report on Monday, June 28th. One equities research analyst has rated the stock with a sell rating, three have given a hold rating and three have issued a buy rating to the company. According to MarketBeat, Ozon has a consensus rating of “Hold” and a consensus price target of $57.40.

Ozon (NASDAQ:OZON) last issued its quarterly earnings results on Tuesday, August 17th. The company reported ($0.97) EPS for the quarter. The business had revenue of $499.08 million during the quarter. As a group, equities research analysts predict that Ozon Holdings PLC will post -2.66 earnings per share for the current year.

Ozon Holdings PLC, together with its subsidiaries, operates as an internet retailer of multi-category consumer products to the general public primarily in the Russian Federation. The company offers products in various categories that include electronics, home and dÃ©cor products, children's goods, fast moving consumer goods, fresh food, and car parts.

Want to see what other hedge funds are holding OZON? Visit HoldingsChannel.com to get the latest 13F filings and insider trades for Ozon Holdings PLC (NASDAQ:OZON). 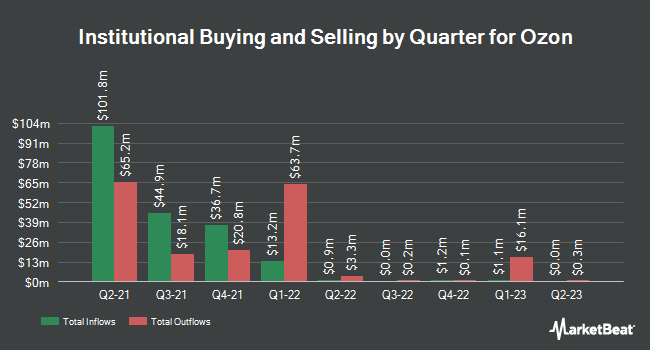 Receive News & Ratings for Ozon Daily - Enter your email address below to receive a concise daily summary of the latest news and analysts' ratings for Ozon and related companies with MarketBeat.com's FREE daily email newsletter.

Complete the form below to receive the latest headlines and analysts' recommendations for Ozon with our free daily email newsletter: