The business also recently disclosed a quarterly dividend, which will be paid on Thursday, October 14th. Shareholders of record on Wednesday, September 29th will be paid a dividend of $1.25 per share. This is a boost from Philip Morris International’s previous quarterly dividend of $1.20. This represents a $5.00 annualized dividend and a yield of 5.08%. The ex-dividend date is Tuesday, September 28th. Philip Morris International’s payout ratio is presently 92.84%.

In other Philip Morris International news, CEO Martin G. King sold 21,725 shares of the business’s stock in a transaction that occurred on Tuesday, July 27th. The stock was sold at an average price of $100.18, for a total transaction of $2,176,410.50. The sale was disclosed in a document filed with the Securities & Exchange Commission, which is accessible through the SEC website. Insiders own 0.21% of the company’s stock.

Further Reading: What is a good dividend yield?

Want to see what other hedge funds are holding PM? Visit HoldingsChannel.com to get the latest 13F filings and insider trades for Philip Morris International Inc. (NYSE:PM). 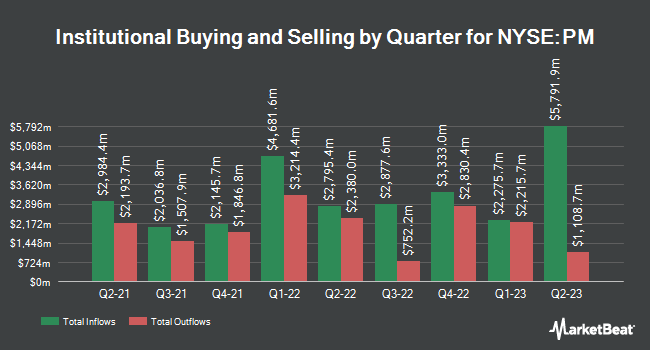 $29.99 Million in Sales Expected for American Software, Inc. This Quarter

Complete the form below to receive the latest headlines and analysts' recommendations for Philip Morris International with our free daily email newsletter: