Analysts forecast that National CineMedia, Inc. (NASDAQ:NCMI) will report $45.63 million in sales for the current fiscal quarter, according to Zacks. Four analysts have issued estimates for National CineMedia’s earnings. The highest sales estimate is $54.70 million and the lowest is $37.90 million. National CineMedia posted sales of $6.00 million in the same quarter last year, which would indicate a positive year-over-year growth rate of 660.5%. The firm is scheduled to issue its next earnings report on Monday, November 1st.

According to Zacks, analysts expect that National CineMedia will report full-year sales of $154.25 million for the current fiscal year, with estimates ranging from $133.80 million to $169.50 million. For the next financial year, analysts expect that the company will post sales of $373.16 million, with estimates ranging from $314.15 million to $423.20 million. Zacks’ sales averages are a mean average based on a survey of research firms that follow National CineMedia.

National CineMedia (NASDAQ:NCMI) last released its quarterly earnings results on Sunday, August 8th. The business services provider reported ($0.28) earnings per share (EPS) for the quarter, missing the Zacks’ consensus estimate of ($0.17) by ($0.11). The firm had revenue of $14.00 million for the quarter, compared to analyst estimates of $20.15 million. During the same quarter in the prior year, the company earned ($0.17) EPS. National CineMedia’s revenue for the quarter was up 250.0% compared to the same quarter last year.

In other news, insider Scott D. Felenstein sold 12,500 shares of the stock in a transaction on Monday, September 20th. The shares were sold at an average price of $2.79, for a total value of $34,875.00. The sale was disclosed in a legal filing with the Securities & Exchange Commission, which is accessible through this link. Corporate insiders own 3.10% of the company’s stock.

The firm also recently disclosed a quarterly dividend, which was paid on Monday, September 6th. Stockholders of record on Monday, August 23rd were paid a $0.05 dividend. This represents a $0.20 dividend on an annualized basis and a dividend yield of 5.67%. The ex-dividend date was Friday, August 20th. National CineMedia’s dividend payout ratio is -20.00%.

National CineMedia, Inc is a holding company. It engages in the provision of advertising, business meetings, event services, and third-party theatre circuits under network affiliate agreements. The firm owns and operates the digital in-theatre network, which is used to distribute content for its advertising promotions, Fathom Events.

Featured Article: How is the S&P 500 index different from the DJIA? 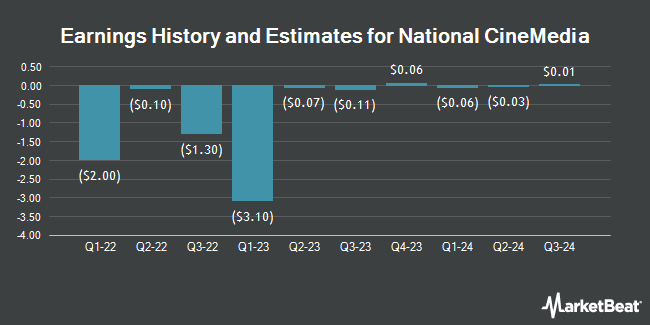 $427.51 Million in Sales Expected for PTC Inc. This Quarter

GoChain Trading Up 8% This Week

Complete the form below to receive the latest headlines and analysts' recommendations for National CineMedia with our free daily email newsletter: