Elastic (NYSE:ESTC) has been assigned a consensus recommendation of “Buy” from the twenty research firms that are covering the stock, MarketBeat.com reports. One analyst has rated the stock with a sell rating, one has issued a hold rating and sixteen have given a buy rating to the company. The average 1-year price objective among brokers that have issued a report on the stock in the last year is $183.00.

Elastic (NYSE:ESTC) last issued its quarterly earnings results on Tuesday, August 24th. The company reported $0.04 earnings per share (EPS) for the quarter, topping the Thomson Reuters’ consensus estimate of ($0.10) by $0.14. The business had revenue of $193.10 million for the quarter, compared to analysts’ expectations of $173.21 million. Elastic had a negative net margin of 21.54% and a negative return on equity of 26.26%. The business’s quarterly revenue was up 49.8% on a year-over-year basis. During the same quarter in the prior year, the company earned $0.06 earnings per share. As a group, equities research analysts anticipate that Elastic will post -1.85 EPS for the current year.

Elastic NV engages in the provision of open source search and analytics engine services. It offers Elastic Stack, a set of software products that ingest and store data from various sources and formats, as well as perform search, analysis, and visualization. The firms Elastic Stack product comprises Elasticsearch, a distributed, real-time search and analytics engine, and data store for various types of data, including textual, numerical, geospatial, structured, and unstructured; Kibana, a user interface, management, and configuration interface for the Elastic Stack; Beats, a single-purpose data shippers for sending data from edge machines to Elasticsearch or Logstash; and Logstash, a data processing pipeline for ingesting data into Elasticsearch or other storage systems. 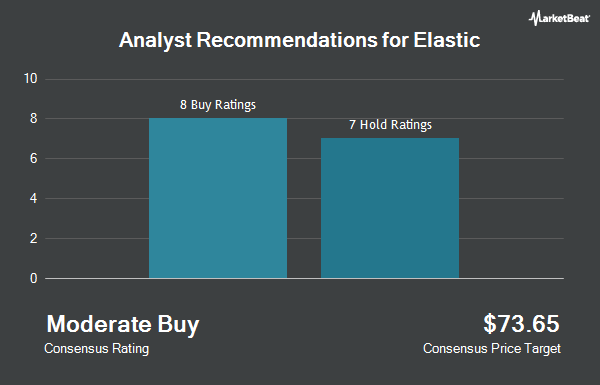 Receive News & Ratings for Elastic Daily - Enter your email address below to receive a concise daily summary of the latest news and analysts' ratings for Elastic and related companies with MarketBeat.com's FREE daily email newsletter.

Complete the form below to receive the latest headlines and analysts' recommendations for Elastic with our free daily email newsletter: