Huber Capital Management LLC increased its stake in shares of Carter Bankshares, Inc. (NASDAQ:CARE) by 22.8% during the 2nd quarter, according to the company in its most recent Form 13F filing with the Securities & Exchange Commission. The firm owned 337,096 shares of the company’s stock after acquiring an additional 62,540 shares during the period. Huber Capital Management LLC’s holdings in Carter Bankshares were worth $4,217,000 as of its most recent filing with the Securities & Exchange Commission.

Carter Bankshares (NASDAQ:CARE) last announced its quarterly earnings results on Thursday, July 29th. The company reported $0.21 earnings per share (EPS) for the quarter, missing the Zacks’ consensus estimate of $0.29 by ($0.08). The company had revenue of $34.44 million during the quarter, compared to analysts’ expectations of $32.83 million. Analysts predict that Carter Bankshares, Inc. will post 1.07 EPS for the current year.

Several research firms have recently weighed in on CARE. Raymond James downgraded Carter Bankshares from an “outperform” rating to a “market perform” rating in a research report on Thursday, July 8th. Zacks Investment Research downgraded Carter Bankshares from a “hold” rating to a “sell” rating in a research report on Wednesday, September 29th.

Carter Bankshares, Inc operates as a bank holding company, which offers deposit accounts, online account opening, and commercial, small business, and personal loan products and services. The company was founded by Worth Harris Carter, Jr. in 1974 and is headquartered in Martinsville, VA.

Recommended Story: What does it mean to hold a stock in street name?

Want to see what other hedge funds are holding CARE? Visit HoldingsChannel.com to get the latest 13F filings and insider trades for Carter Bankshares, Inc. (NASDAQ:CARE). 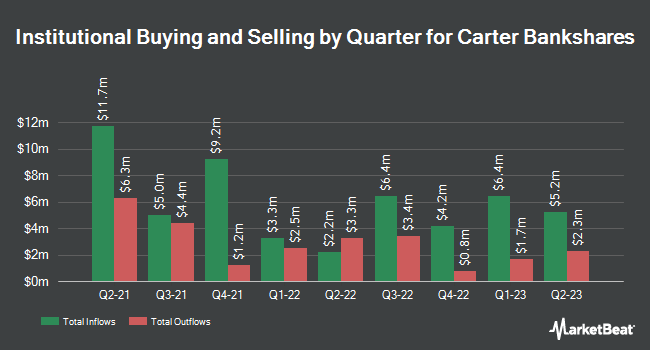 Complete the form below to receive the latest headlines and analysts' recommendations for Carter Bankshares with our free daily email newsletter: