According to Zacks, analysts expect that Riley Exploration Permian will report full-year earnings of $0.17 per share for the current year, with EPS estimates ranging from ($1.88) to $2.22. For the next fiscal year, analysts anticipate that the business will post earnings of $3.53 per share, with EPS estimates ranging from $3.39 to $3.67. Zacks’ EPS averages are a mean average based on a survey of research analysts that that provide coverage for Riley Exploration Permian.

Riley Exploration Permian (NYSE:REPX) last announced its quarterly earnings data on Thursday, August 12th. The company reported $0.43 EPS for the quarter, missing the Thomson Reuters’ consensus estimate of $0.67 by ($0.24). The company had revenue of $42.15 million for the quarter, compared to analysts’ expectations of $32.34 million.

The company also recently disclosed a quarterly dividend, which will be paid on Thursday, November 4th. Stockholders of record on Thursday, October 21st will be paid a dividend of $0.31 per share. This is a boost from Riley Exploration Permian’s previous quarterly dividend of $0.28. The ex-dividend date of this dividend is Wednesday, October 20th. This represents a $1.24 dividend on an annualized basis and a dividend yield of 4.77%.

Riley Exploration Permian, Inc is an independent oil and natural gas company. It engages in the acquisition, exploration, development and production of oil, natural gas, and natural gas liquids in the Permian Basin. The company was founded in 1916 and is headquartered in Oklahoma City, OK. 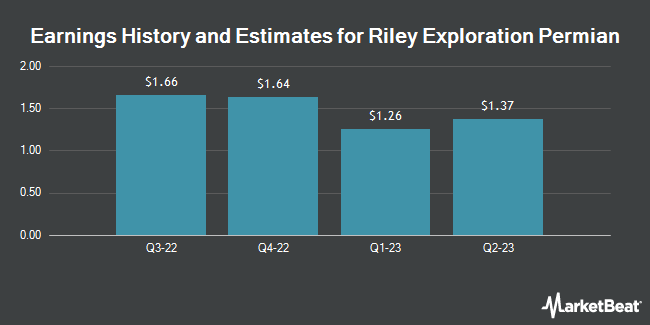 Complete the form below to receive the latest headlines and analysts' recommendations for Riley Exploration Permian with our free daily email newsletter: