The Sherwin-Williams (NYSE:SHW) posted its earnings results on Monday. The specialty chemicals company reported $2.09 earnings per share for the quarter, beating the Thomson Reuters’ consensus estimate of $2.07 by $0.02, MarketWatch Earnings reports. The company had revenue of $5.15 billion for the quarter, compared to analyst estimates of $5.09 billion. The Sherwin-Williams had a return on equity of 72.71% and a net margin of 11.05%. The Sherwin-Williams’s revenue was up .5% compared to the same quarter last year. During the same quarter in the prior year, the company earned $2.76 earnings per share.

The business also recently declared a quarterly dividend, which will be paid on Friday, December 3rd. Investors of record on Friday, November 19th will be given a dividend of $0.55 per share. This represents a $2.20 annualized dividend and a yield of 0.69%. The ex-dividend date of this dividend is Thursday, November 18th. The Sherwin-Williams’s dividend payout ratio (DPR) is presently 26.86%.

A hedge fund recently raised its stake in The Sherwin-Williams stock. Morgan Stanley grew its holdings in shares of The Sherwin-Williams Company (NYSE:SHW) by 123.4% during the second quarter, according to the company in its most recent Form 13F filing with the Securities and Exchange Commission. The fund owned 2,950,247 shares of the specialty chemicals company’s stock after buying an additional 1,629,745 shares during the period. Morgan Stanley owned 1.12% of The Sherwin-Williams worth $803,794,000 as of its most recent filing with the Securities and Exchange Commission. Hedge funds and other institutional investors own 75.94% of the company’s stock.

The Sherwin-Williams Co engages in the manufacture and trade of paint and coatings. It operates through the following segments: America Group, Consumer Brands Group, and Performance Coating Group. The America Group segment manages the exclusive outlets for Sherwin-Williams branded paints, stains, supplies, equipment, and floor covering.

Read More: What are the FAANG Stocks? 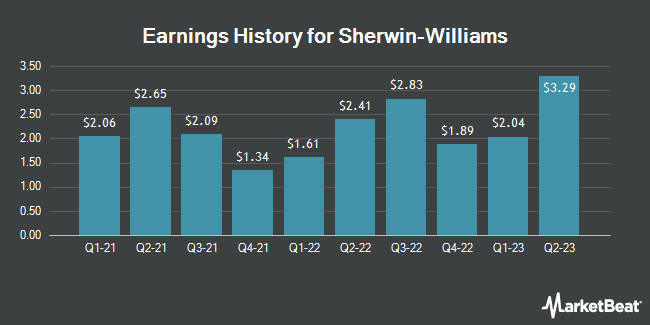 SnowGem Trading Down 13.2% This Week

Daily Ratings & News for The Sherwin-Williams

Complete the form below to receive the latest headlines and analysts' recommendations for The Sherwin-Williams with our free daily email newsletter: