Wall Street brokerages expect that TEGNA Inc. (NYSE:TGNA) will report $786.60 million in sales for the current quarter, Zacks Investment Research reports. Two analysts have made estimates for TEGNA’s earnings, with estimates ranging from $780.20 million to $793.00 million. TEGNA reported sales of $937.58 million during the same quarter last year, which would suggest a negative year-over-year growth rate of 16.1%. The firm is expected to announce its next quarterly earnings report on Monday, March 7th.

According to Zacks, analysts expect that TEGNA will report full year sales of $3.00 billion for the current fiscal year, with estimates ranging from $3.00 billion to $3.01 billion. For the next fiscal year, analysts expect that the business will post sales of $3.44 billion, with estimates ranging from $3.41 billion to $3.47 billion. Zacks Investment Research’s sales averages are a mean average based on a survey of research analysts that cover TEGNA.

TEGNA (NYSE:TGNA) last released its earnings results on Thursday, November 4th. The company reported $0.55 earnings per share for the quarter, topping the Zacks’ consensus estimate of $0.49 by $0.06. The company had revenue of $756.00 million during the quarter, compared to the consensus estimate of $746.88 million. TEGNA had a return on equity of 27.31% and a net margin of 18.76%. TEGNA’s quarterly revenue was up 2.4% compared to the same quarter last year. During the same quarter in the previous year, the company posted $0.59 EPS.

Separately, Barrington Research downgraded TEGNA from an “outperform” rating to a “market perform” rating and set a $23.00 target price for the company. in a research report on Wednesday, September 22nd.

The business also recently declared a quarterly dividend, which will be paid on Monday, January 3rd. Shareholders of record on Friday, December 10th will be paid a $0.095 dividend. The ex-dividend date of this dividend is Thursday, December 9th. This represents a $0.38 dividend on an annualized basis and a yield of 1.80%. TEGNA’s dividend payout ratio (DPR) is currently 14.18%. 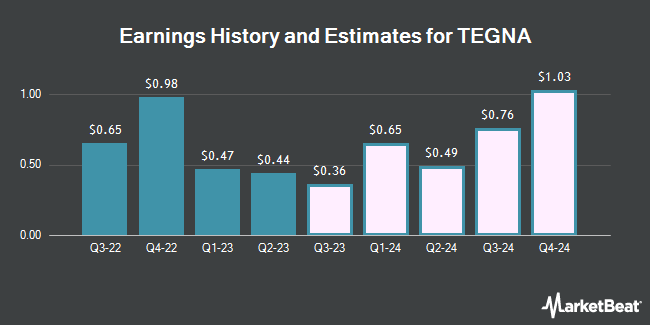 Receive News & Ratings for TEGNA Daily - Enter your email address below to receive a concise daily summary of the latest news and analysts' ratings for TEGNA and related companies with MarketBeat.com's FREE daily email newsletter.

Parkland Given a C$52.00 Price Target at Raymond James

Complete the form below to receive the latest headlines and analysts' recommendations for TEGNA with our free daily email newsletter: