Exxon Mobil (NYSE:XOM) had its price target upped by Truist from $65.00 to $70.00 in a research report released on Friday, The Fly reports. Truist currently has a hold rating on the oil and gas company’s stock.

Exxon Mobil (NYSE:XOM) last posted its quarterly earnings data on Thursday, October 28th. The oil and gas company reported $1.58 earnings per share (EPS) for the quarter, beating the Thomson Reuters’ consensus estimate of $1.56 by $0.02. The company had revenue of $73.79 billion during the quarter, compared to analyst estimates of $72.05 billion. Exxon Mobil had a positive return on equity of 8.66% and a negative net margin of 2.39%. The firm’s quarterly revenue was up 59.7% on a year-over-year basis. During the same quarter last year, the company earned ($0.18) earnings per share. Equities analysts forecast that Exxon Mobil will post 5.07 earnings per share for the current fiscal year.

The firm also recently disclosed a quarterly dividend, which was paid on Friday, December 10th. Investors of record on Friday, November 12th were given a $0.88 dividend. The ex-dividend date was Wednesday, November 10th. This is a boost from Exxon Mobil’s previous quarterly dividend of $0.87. This represents a $3.52 annualized dividend and a yield of 4.90%. Exxon Mobil’s dividend payout ratio is -253.24%.

In other news, VP Leonard M. Fox sold 7,300 shares of the stock in a transaction on Tuesday, December 14th. The stock was sold at an average price of $61.81, for a total transaction of $451,213.00. The transaction was disclosed in a legal filing with the SEC, which can be accessed through this hyperlink. Also, Director Michael J. Angelakis purchased 5,000 shares of the stock in a transaction dated Wednesday, November 3rd. The shares were purchased at an average cost of $64.00 per share, for a total transaction of $320,000.00. The disclosure for this purchase can be found here. Over the last three months, insiders have bought 5,544 shares of company stock worth $352,640 and have sold 28,400 shares worth $1,771,158. 0.05% of the stock is owned by corporate insiders.

Featured Story: What is the downside to momentum investing? 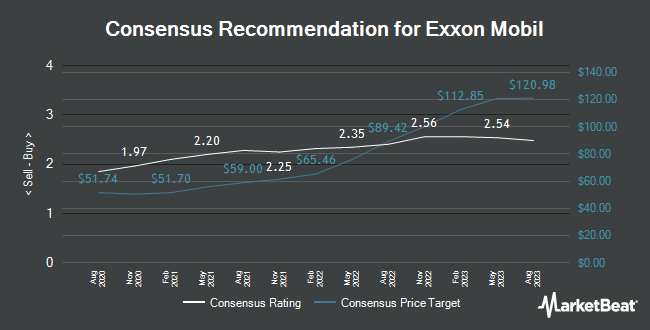 LSI Industries Inc. Expected to Announce Earnings of $0.06 Per Share

Complete the form below to receive the latest headlines and analysts' recommendations for Exxon Mobil with our free daily email newsletter: