Knights of Columbus Asset Advisors LLC trimmed its holdings in Apellis Pharmaceuticals, Inc. (NASDAQ:APLS) by 27.5% during the 3rd quarter, according to the company in its most recent Form 13F filing with the SEC. The firm owned 16,228 shares of the company’s stock after selling 6,150 shares during the quarter. Knights of Columbus Asset Advisors LLC’s holdings in Apellis Pharmaceuticals were worth $535,000 at the end of the most recent quarter.

Apellis Pharmaceuticals (NASDAQ:APLS) last posted its quarterly earnings data on Monday, November 8th. The company reported ($2.28) EPS for the quarter, missing the Thomson Reuters’ consensus estimate of ($1.73) by ($0.55). The business had revenue of $5.65 million during the quarter, compared to the consensus estimate of $2.32 million. During the same period in the prior year, the business posted ($1.79) EPS. Analysts forecast that Apellis Pharmaceuticals, Inc. will post -8.45 earnings per share for the current fiscal year.

In other news, major shareholder Morningside Venture Investment bought 250,000 shares of the business’s stock in a transaction on Thursday, November 18th. The shares were bought at an average price of $40.00 per share, with a total value of $10,000,000.00. The transaction was disclosed in a legal filing with the Securities & Exchange Commission, which can be accessed through the SEC website. Also, General Counsel David O. Watson sold 1,200 shares of the company’s stock in a transaction on Monday, December 27th. The stock was sold at an average price of $48.50, for a total value of $58,200.00. The disclosure for this sale can be found here. Insiders sold 12,396 shares of company stock worth $582,787 over the last quarter. 9.50% of the stock is currently owned by insiders.

Apellis Pharmaceuticals, Inc is a clinical-stage biopharmaceutical company, which develops novel therapeutic compounds. It develops complement immunotherapies for the treatment of complement-dependent autoimmune and inflammatory diseases through APL-2 product. The company was founded by Candace Rose Depp, Pascal Deschatelets, Cedric Francois, Alec Machiels on September 25, 2009 and is headquartered in Waltham, MA.

Read More: What is meant by a buy rating?

Want to see what other hedge funds are holding APLS? Visit HoldingsChannel.com to get the latest 13F filings and insider trades for Apellis Pharmaceuticals, Inc. (NASDAQ:APLS). 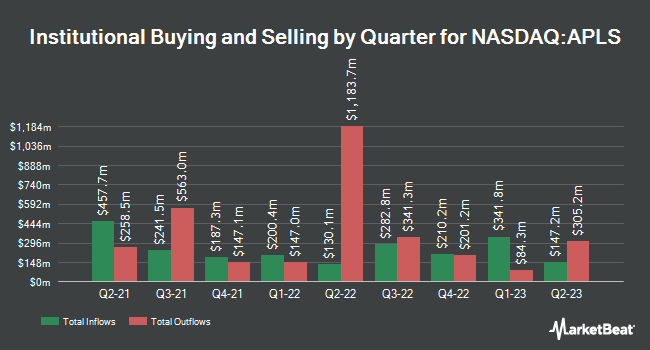 Complete the form below to receive the latest headlines and analysts' recommendations for Apellis Pharmaceuticals with our free daily email newsletter: