Kraft Heinz (NASDAQ:KHC) had its price target raised by Morgan Stanley from $37.00 to $38.00 in a research note published on Tuesday, The Fly reports. Morgan Stanley currently has an equal weight rating on the stock.

Other equities analysts have also issued reports about the stock. Guggenheim lowered shares of Kraft Heinz from a buy rating to a neutral rating and cut their price target for the stock from $46.00 to $33.00 in a report on Wednesday, December 8th. TheStreet raised shares of Kraft Heinz from a c rating to a b- rating in a report on Monday, November 29th. Two equities research analysts have rated the stock with a sell rating, six have issued a hold rating and one has issued a buy rating to the stock. According to MarketBeat, the stock has an average rating of Hold and a consensus price target of $39.33.

Kraft Heinz (NASDAQ:KHC) last released its quarterly earnings results on Wednesday, October 27th. The company reported $0.65 earnings per share (EPS) for the quarter, topping the Thomson Reuters’ consensus estimate of $0.58 by $0.07. Kraft Heinz had a net margin of 8.76% and a return on equity of 7.21%. The business had revenue of $6.32 billion for the quarter, compared to analyst estimates of $6.08 billion. During the same period in the previous year, the company earned $0.70 earnings per share. The business’s revenue for the quarter was down 1.8% on a year-over-year basis. Analysts anticipate that Kraft Heinz will post 2.79 EPS for the current fiscal year.

The business also recently disclosed a quarterly dividend, which was paid on Friday, December 17th. Stockholders of record on Friday, November 26th were paid a dividend of $0.40 per share. The ex-dividend date of this dividend was Wednesday, November 24th. This represents a $1.60 annualized dividend and a dividend yield of 4.21%. Kraft Heinz’s payout ratio is currently 85.56%.

The Kraft Heinz Co engages in the manufacture and market of food and beverage products. The firm operates through the following geographical segments: United States, Canada and International. Its brands include Oscar Meyer, Velveeta, Smart Ones, Caprisun, Kool-Aid, Golden circle and Honig. The company was founded on July 2, 2015 and is headquartered in Pittsburgh, PA.

Featured Article: How to Invest in an Index Fund 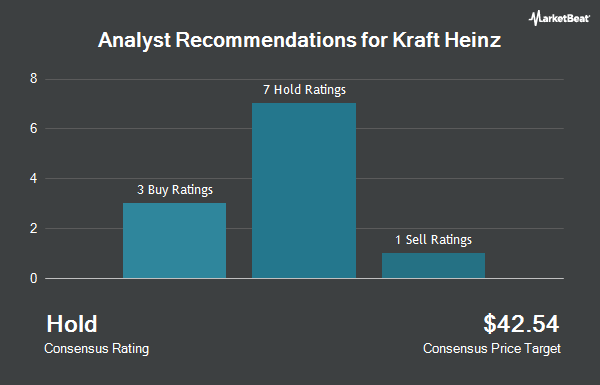 Xaurum Trading Down 14.1% This Week

Complete the form below to receive the latest headlines and analysts' recommendations for Kraft Heinz with our free daily email newsletter: