Wesdome Gold Mines (TSE:WDO) had its target price trimmed by National Bankshares from C$15.50 to C$15.25 in a research report released on Friday, BayStreet.CA reports. The firm currently has an outperform rating on the stock.

Wesdome Gold Mines (TSE:WDO) last released its quarterly earnings results on Wednesday, November 10th. The company reported C$0.13 earnings per share (EPS) for the quarter, meeting the Zacks’ consensus estimate of C$0.13. The firm had revenue of C$67.55 million for the quarter. On average, sell-side analysts forecast that Wesdome Gold Mines will post 1.13 earnings per share for the current fiscal year.

Wesdome Gold Mines Ltd. engages in the exploration, extraction, processing, and reclamation of gold in Canada. It principally produces gold in the form of dorÃ© bars; and silver as a by-product. The company's principal assets include the Eagle River Mine, which consists of 3 contiguous mining leases and 442 contiguous active mining claims covering an area of 7,958 hectares; the Mishi Mine that consists of 19 patented mining claims, 5 mining leases, and 5 staked claims covering an area of 3,055 hectares; and the Eagle River Mill located near Wawa, Ontario, as well as the Kiena Mining and Milling Complex and exploration properties located in Val D'Or, Quebec. 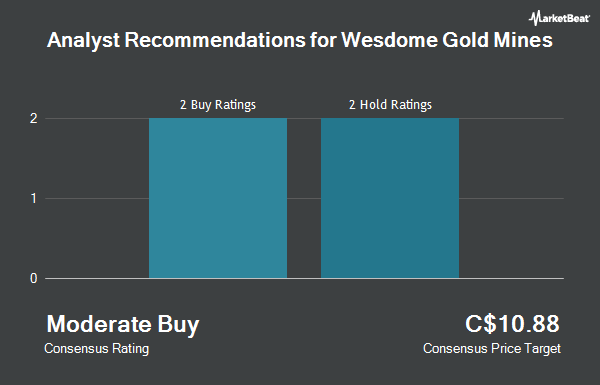 Complete the form below to receive the latest headlines and analysts' recommendations for Wesdome Gold Mines with our free daily email newsletter: