Analysts expect Duluth Holdings Inc (NASDAQ:DLTH – Get Rating) to report $116.10 million in sales for the current quarter, Zacks reports. Two analysts have provided estimates for Duluth’s earnings, with the lowest sales estimate coming in at $115.80 million and the highest estimate coming in at $116.40 million. Duluth posted sales of $133.42 million in the same quarter last year, which would indicate a negative year-over-year growth rate of 13%. The firm is expected to report its next earnings results on Monday, January 1st.

According to Zacks, analysts expect that Duluth will report full year sales of $739.90 million for the current fiscal year, with estimates ranging from $736.40 million to $743.40 million. For the next year, analysts expect that the business will post sales of $807.80 million, with estimates ranging from $796.30 million to $819.30 million. Zacks Investment Research’s sales calculations are an average based on a survey of analysts that cover Duluth.

Duluth (NASDAQ:DLTH – Get Rating) last posted its quarterly earnings data on Thursday, March 10th. The company reported $0.53 earnings per share (EPS) for the quarter, topping analysts’ consensus estimates of $0.47 by $0.06. The company had revenue of $270.76 million for the quarter, compared to the consensus estimate of $280.90 million. Duluth had a net margin of 4.25% and a return on equity of 14.45%. During the same quarter last year, the firm posted $0.67 earnings per share. 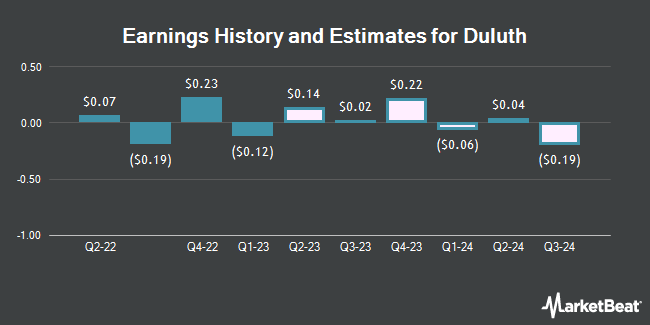 Receive News & Ratings for Duluth Daily - Enter your email address below to receive a concise daily summary of the latest news and analysts' ratings for Duluth and related companies with MarketBeat.com's FREE daily email newsletter.

Alvopetro Energy Ltd. Short Interest Up 54.1% in May

AGL Energy Limited Short Interest Down 37.3% in May

$1.15 Billion in Sales Expected for Vail Resorts, Inc. This Quarter

Complete the form below to receive the latest headlines and analysts' recommendations for Duluth with our free daily email newsletter: