Aptinyx (NASDAQ:APTX – Get Rating) issued its quarterly earnings results on Thursday. The company reported ($0.29) EPS for the quarter, topping analysts’ consensus estimates of ($0.31) by $0.02, Fidelity Earnings reports. During the same period in the prior year, the firm posted ($0.22) earnings per share.

About Aptinyx (Get Rating)

Aptinyx Inc, a clinical-stage biopharmaceutical company, focuses on the discovery, development, and commercialization of novel, proprietary, and synthetic small molecules for the treatment of brain and nervous system disorders. The company is developing NYX-2925, which is in Phase II clinical development for the treatment of painful diabetic peripheral neuropathy, as well as in Phase II/b clinical trial for treating fibromyalgia. 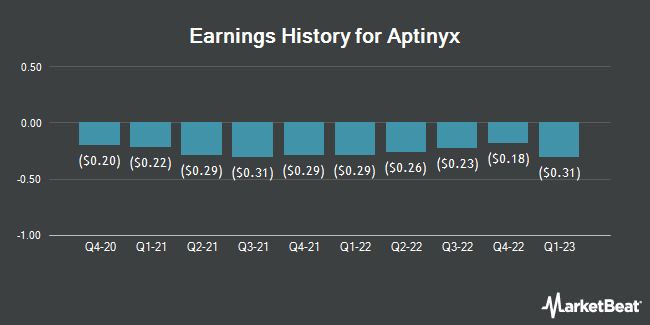 Receive News & Ratings for Aptinyx Daily - Enter your email address below to receive a concise daily summary of the latest news and analysts' ratings for Aptinyx and related companies with MarketBeat.com's FREE daily email newsletter.

Complete the form below to receive the latest headlines and analysts' recommendations for Aptinyx with our free daily email newsletter: