Cutter & CO Brokerage Inc. bought a new stake in shares of SouthState Co. (NASDAQ:SSB – Get Rating) in the 4th quarter, according to its most recent disclosure with the Securities and Exchange Commission. The fund bought 2,580 shares of the bank’s stock, valued at approximately $207,000.

SouthState (NASDAQ:SSB – Get Rating) last released its quarterly earnings data on Thursday, April 28th. The bank reported $1.69 earnings per share (EPS) for the quarter, topping the consensus estimate of $1.31 by $0.38. The firm had revenue of $347.56 million during the quarter, compared to analysts’ expectations of $349.97 million. SouthState had a return on equity of 10.33% and a net margin of 30.19%. SouthState’s revenue was down 3.0% compared to the same quarter last year. During the same quarter in the prior year, the business posted $2.17 earnings per share. On average, analysts predict that SouthState Co. will post 6.36 EPS for the current year.

The company also recently declared a quarterly dividend, which will be paid on Friday, May 20th. Stockholders of record on Friday, May 13th will be given a $0.49 dividend. This represents a $1.96 dividend on an annualized basis and a dividend yield of 2.60%. The ex-dividend date is Thursday, May 12th. SouthState’s dividend payout ratio is currently 32.45%.

Want to see what other hedge funds are holding SSB? Visit HoldingsChannel.com to get the latest 13F filings and insider trades for SouthState Co. (NASDAQ:SSB – Get Rating). 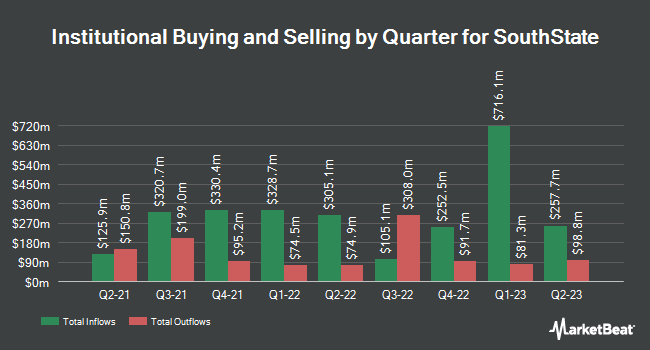 Complete the form below to receive the latest headlines and analysts' recommendations for SouthState with our free daily email newsletter: