TD Asset Management Inc. grew its stake in shares of Kinross Gold Co. (NYSE:KGC – Get Rating) (TSE:K) by 4.9% during the 4th quarter, according to the company in its most recent Form 13F filing with the Securities & Exchange Commission. The institutional investor owned 6,499,229 shares of the mining company’s stock after acquiring an additional 302,457 shares during the quarter. TD Asset Management Inc. owned about 0.52% of Kinross Gold worth $37,766,000 as of its most recent SEC filing.

Kinross Gold (NYSE:KGC – Get Rating) (TSE:K) last announced its earnings results on Tuesday, May 10th. The mining company reported $0.06 earnings per share (EPS) for the quarter, missing analysts’ consensus estimates of $0.10 by ($0.04). Kinross Gold had a negative net margin of 12.88% and a positive return on equity of 6.27%. The business had revenue of $768.00 million for the quarter, compared to analysts’ expectations of $1.05 billion. During the same quarter last year, the business earned $0.15 EPS. The company’s quarterly revenue was down .1% on a year-over-year basis. Research analysts predict that Kinross Gold Co. will post 0.57 EPS for the current year.

Kinross Gold Corporation, together with its subsidiaries, engages in the acquisition, exploration, and development of gold properties principally in the United States, the Russian Federation, Brazil, Chile, Ghana, and Mauritania. It is also involved in the extraction and processing of gold-containing ores; reclamation of gold mining properties; and production and sale of silver. 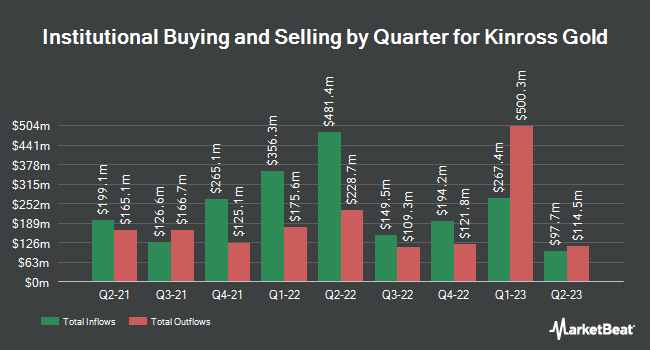 $14.35 Billion in Sales Expected for LyondellBasell Industries This Quarter

Complete the form below to receive the latest headlines and analysts' recommendations for Kinross Gold with our free daily email newsletter: