Shares of CTI BioPharma Corp. (NASDAQ:CTIC – Get Rating) have earned an average recommendation of “Buy” from the eight analysts that are covering the stock, Marketbeat.com reports. One research analyst has rated the stock with a sell recommendation, one has issued a hold recommendation and six have assigned a buy recommendation to the company. The average 1-year price objective among brokers that have issued a report on the stock in the last year is $9.83.

CTI BioPharma (NASDAQ:CTIC – Get Rating) last announced its earnings results on Thursday, May 12th. The biopharmaceutical company reported ($0.37) EPS for the quarter, missing the consensus estimate of ($0.35) by ($0.02). The firm had revenue of $2.30 million during the quarter, compared to the consensus estimate of $2.15 million. Analysts forecast that CTI BioPharma will post -0.77 earnings per share for the current fiscal year.

CTI BioPharma Corp., a biopharmaceutical company, focuses on the acquisition, development, and commercialization of novel targeted therapies for blood-related cancers in the United States. It offers VONJO (pacritinib), an investigational oral kinase inhibitor with specificity for JAK2, FLT3, IRAK1, and CSF1R for the treatment of adult patients with myelofibrosis. 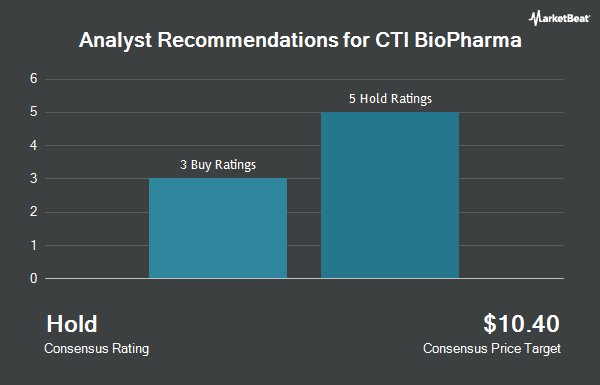 LiveRamp Cut to Hold at StockNews.com

iCAD Price Target Cut to $8.00 by Analysts at BTIG Research

Complete the form below to receive the latest headlines and analysts' recommendations for CTI BioPharma with our free daily email newsletter: