Lowe’s Companies (NYSE:LOW – Get Rating) last issued its quarterly earnings data on Wednesday, May 18th. The home improvement retailer reported $3.51 EPS for the quarter, beating analysts’ consensus estimates of $3.22 by $0.29. Lowe’s Companies had a negative return on equity of 251.50% and a net margin of 8.85%. The firm had revenue of $23.66 billion for the quarter, compared to analyst estimates of $23.72 billion. During the same period in the prior year, the firm posted $3.21 EPS. The company’s revenue for the quarter was down 3.1% on a year-over-year basis. Sell-side analysts predict that Lowe’s Companies will post 13.49 EPS for the current year.

About Lowe’s Companies (Get Rating)

Lowe's Companies, Inc, together with its subsidiaries, operates as a home improvement retailer in the United States and internationally. The company offers a line of products for construction, maintenance, repair, remodeling, and decorating. It provides home improvement products, such as appliances, seasonal and outdoor living, lawn and garden, lumber, kitchens and bath, tools, paint, millwork, hardware, flooring, rough plumbing, building materials, décor, lighting, and electrical. 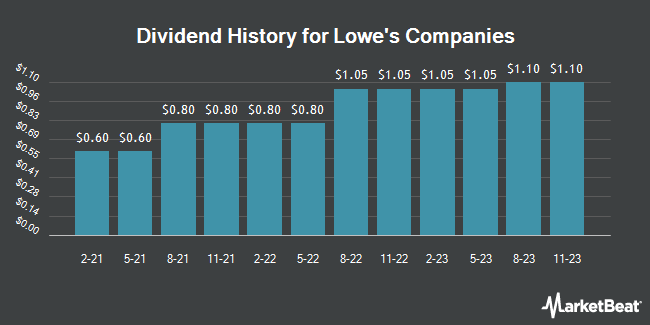 Complete the form below to receive the latest headlines and analysts' recommendations for Lowe's Companies with our free daily email newsletter: