Star Bulk Carriers has a payout ratio of 118.5% indicating that the company cannot currently cover its dividend with earnings alone and is relying on its balance sheet to cover its dividend payments. Research analysts expect Star Bulk Carriers to earn $5.77 per share next year, which means the company may not be able to cover its $6.60 annual dividend with an expected future payout ratio of 114.4%.

Star Bulk Carriers Corp., a shipping company, engages in the ocean transportation of dry bulk cargoes worldwide. The company's vessels transport a range of major bulks, including iron ores, coal, and grains, as well as minor bulks, such as bauxite, fertilizers, and steel products. As of December 31, 2021, it had a fleet of 128 vessels with an aggregate capacity of approximately 14.1 million deadweight tons, including 17 Newcastlemax, 24 Capesize, 7 Post Panamax, 41 Kamsarmax, 2 Panamax, 20 Ultramax, and 17 Supramax vessels. 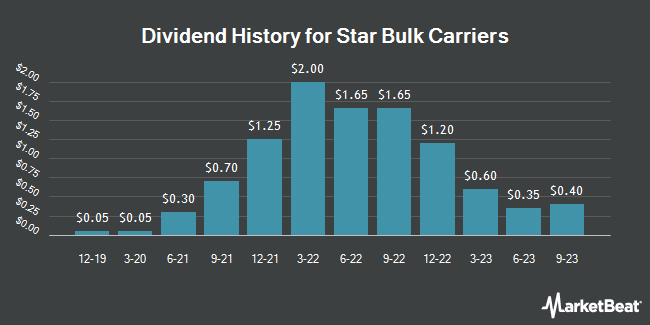 Complete the form below to receive the latest headlines and analysts' recommendations for Star Bulk Carriers with our free daily email newsletter: