Crane Holdings, Co. (NYSE:CR – Get Rating) announced a quarterly dividend on Monday, January 23rd, Zacks reports. Stockholders of record on Tuesday, February 28th will be given a dividend of 0.47 per share by the conglomerate on Wednesday, March 8th. This represents a $1.88 dividend on an annualized basis and a dividend yield of 1.63%. The ex-dividend date of this dividend is Monday, February 27th.

Crane (NYSE:CR – Get Rating) last released its quarterly earnings data on Monday, January 23rd. The conglomerate reported $2.13 EPS for the quarter, beating analysts’ consensus estimates of $1.90 by $0.23. The business had revenue of $824.10 million during the quarter, compared to the consensus estimate of $819.89 million. Crane had a return on equity of 24.93% and a net margin of 13.10%. The firm’s revenue was down .1% on a year-over-year basis. During the same quarter in the prior year, the company posted $1.25 earnings per share. As a group, equities research analysts expect that Crane will post 8.13 EPS for the current year.

Several brokerages have issued reports on CR. TheStreet upgraded Crane from a “c+” rating to a “b-” rating in a report on Thursday, November 10th. Stifel Nicolaus lowered their price target on Crane from $123.00 to $121.00 and set a “buy” rating for the company in a report on Tuesday, October 11th. Morgan Stanley upgraded Crane from an “equal weight” rating to an “overweight” rating and increased their price target for the stock from $116.00 to $129.00 in a report on Monday, December 12th. StockNews.com cut Crane from a “strong-buy” rating to a “buy” rating in a research report on Wednesday, October 26th. Finally, DA Davidson upped their price objective on Crane from $130.00 to $140.00 in a research report on Wednesday. Four equities research analysts have rated the stock with a buy rating, Based on data from MarketBeat.com, the company has an average rating of “Buy” and a consensus price target of $128.75.

Crane Holdings Co engages in the management of a subsidiary, which manufacture aerospace equipment, electronics systems, and flow control systems. The company was founded on December 2, 2021 and is headquartered in Stamford, CT. 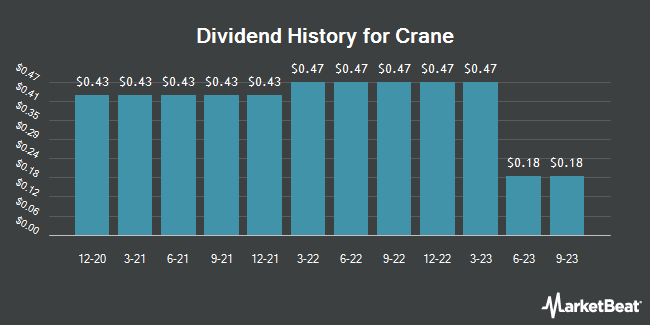 Receive News & Ratings for Crane Daily - Enter your email address below to receive a concise daily summary of the latest news and analysts' ratings for Crane and related companies with MarketBeat.com's FREE daily email newsletter.

MOBLAND Trading Up 1.8% Over Last 7 Days

Complete the form below to receive the latest headlines and analysts' recommendations for Crane with our free daily email newsletter: