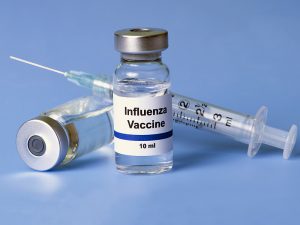 In the United States, flu-related deaths are not very common, though they do occur.  Typically, the only people who die from complications related to the flu are those with weakened immune systems (babies, the elderly, and chronically sick people).  A new study, though, warns that when it comes to pediatric deaths, those with the flu probably died because they were not vaccinated.

Or, to put it another way:  a simple flu shot probably could have spared most (if not all) of those infants.

These findings greatly underscore the vaccination debate (that vaccines only work if everyone gets them—something called “herd immunity”). However, this is the first real study to demonstrate that flu vaccination can significantly reduce the risk of a child dying from an influenza infection.

According to researchers, “These results reinforce the need to increase influenza vaccination coverage, especially among children at increased risk of influenza-related complications and death.”

The study followed 358 children (between the ages of 6 months and 17 years) over four seasons.  291 of these children had vaccination statuses, but only about 26 percent had actually received their vaccinations. Flu-related deaths were reported across 43 US states.

In a CDC news release, Influenza epidemiologist and lead study author Brendan Flannery, PhD, notes, “Every year CDC receives reports of children who died from the flu. This study tells us that we can prevent more of these deaths by vaccinating more.”

In September, US health officials had expressed new concerns over new flu vaccine recommendations which could result in fewer children receiving their vaccinations.

Indeed, CDC Director Tom Frieden reports, “We’re concerned that vaccination rates could be lower this year because the mist isn’t available. A lot of kids prefer the mist to the shot.”

So far, the vaccination coverage estimates from last influenza season (2015-2016) showed that vaccination rates among children remain steady. However, the data also shows that there has been a notable decline in vaccinations among adults older than 50 with influenza-related hospitalizations increasing for those older than 64 percent.