Blue Apron Struggles To Hold Onto Customers After IPO 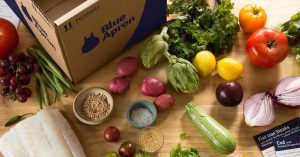 Blue Apron Holdings Inc have only recently went public, but the company is already delivering on some of their goals; at least, in terms of what investors wanted. In the meal-kit delivery company’s very first earnings report, they were able to show a notable decrease in spending on marketing.

At the same time, though, this move came at a price: revenues might have beat estimates but it was at the expense of membership. This loss of customers sent shares down nearly 20 percent.

Before going public, the company—which sells fresh ingredients and recipe cards packaged in a single box—had been spend quite heavily on its marketing efforts. The goal, of course, was to create more awareness of the concept as well as to distinguish itself from the handful of other companies out there with similar offerings. Analysts had, at the time, expressed their concern over how much money Blue Apron was actually spending on this marketing, particularly referencing digital media and New York subway print advertising. They also questioned if the company’s business model would be sustainable, long term.

Now, Blue Apron says that it did cut back on marketing by as much as 43 percent in the second quarter (compared against the first quarter). However, that massive decline also brought upon a slowing in customer growth and order rate. As a matter of fact, the company retained about 943,000 customers towards the end of June: a decline of about 9 percent, since March.

Sales for the period (ending June 30) were better than the average analyst estimate: $238.1 million vs $235.8 million. However, after making $5.5 million in profit from the same quarter last year, Blue Apron posted a whopping $31.6 million loss.

But this should not really be much of a surprise. Since the IPO, in June, the stock has already slid nearly 50 percent. Analysts argue that the recent acquisition of Whole Foods by Amazon.com Inc—to offer fresh food delivery that might lead to meal-kit options—could be a major culprit. However, Blue Apron has been trying to expand into other meal/cooking-related products like wine pairing and branded cookware. Running its core business, though, requires very high costs at the company’s fulfillment centers (where they assemble the meal-kit boxes).