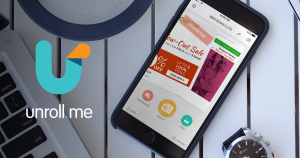 Users of Unroll.me have reacted angrily to reports that the email management service had been selling their personal data to Uber. The free service which helps its users easily and conveniently unsubscribe from lists can scour inboxes and collect data and intelligence that would be useful to business organizations. In one particular case, it was scouring inboxes looking for receipts from companies offering services that rival Uber’s.

“Using an email digest service it owns named Unroll.me, Slice [Intelligence] collected its customers’ emailed Lyft receipts from their inboxes and sold the anonymized data to Uber. Uber used the data as a proxy for the health of Lyft’s business,” read the report which appeared in the New York Times.

Some of the backlash consisted of tech writers asking people to quit using the email management service. Other tech writers warned people against providing unlimited access of their inboxes to such firms. An apology from the chief executive officer of Slice Intelligence, Unroll.me’s owner, only made matters worse because it appeared half-hearted.

Slice Intelligence later clarified that the data it sold to companies like Uber was anonymized and did not include personal details that could help identify a user such as their name. To determine which email to scour, the service looked at the subject and header. If an email had a receipt attached, it would be pulled for analysis.

According to the Slice’s public relations and marketing vice president, Jaimee Minney, receipts emanating from transportation companies were the most tracked. Some of the information that is highly sought after in the sector includes the amount of fare and which market it originated in. The information and intelligence is used for purposes of estimating the size of the market share as well as other metrics that may help a firm compete.

Some of the backlash from users was also caused by speculation that copies of emails of users were stored on servers that were poorly secured. Minney, however, denied that charge and said that only promotional emails and HTML headers are stored. She denied that any personal emails were stored and added that the firm was following the best practices in the industry.

Despite the heat being turned on Unroll.me, many other firms are involved in collecting and selling personal data in what is a sector that is largely unregulated. Other bigger data brokers such as ID Analytics, Datalogix, CoreLogic and Acxiom have been subjects of inquiries from the U.S. Federal Trade Commission and even congressional committees.