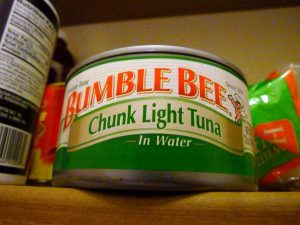 The U.S. Department of Justice announced Monday that Bumble Bee has consented to pleading guilty to felony charges of conspiring with firms it was competing with to fix prices of canned tuna. Bumble Bee, which is one of the biggest canned tuna producer in the United States, will consequently pay a fine of $25 million. In case Bumble Bee gets acquired, the fine could rise to a total of $81.5 million.

In a two-year period, representatives of Bumble Bee are alleged to have participated in meetings and conversations with representatives from other large packaged seafood companies with a view to fixing, raising and maintaining prices of the said packaged seafood products. Filing of the felony charge was done at the United States District Court based in San Francisco in California’s Northern District.

Late last year, two senior vice presidents of Bumble Bee consented to a guilty plea over the price-fixing allegations. These were the trade marketing SVP and the Sales SVP. Currently, the two are on paid leave. According to U.S. Department of Justice, the felonies were committed between 2011 and 2013. The plea deal will, however, have to get the approval of the court.

In a statement Bumble Bee indicated that it had given the Justice Department its full cooperation and was treating the matter with the seriousness it deserved.

“We accept full responsibility for needing to earn back any lost trust in our Company and will do so by acting with integrity and transparency in every way we operate our business,” said Jill Irvin, Bumble Bee’s General Counsel, in a statement.

Among the measures taken by Bumble Bee to remedy the situation and avoid a repeat includes revising internal polices and hiring a chief of compliance.

In the seafood industry concerns have raged for a long time over the limited competition in the sector. Two years ago, the Chicken of the Sea owner, Thai Union Group, abandoned plans to acquire Bumble Bee after the U.S. Department of Justice expressed its reservations. There have also been civic suits alleging the practice of price-fixing in the tuna industry by the bigger players in the market.

The court documents in the Bumble Bee price-fixing case do not, however, reveal by how much consumers were overcharged through the price machinations. It is also not clear who Bumble Bee co-conspired with. The investigation is ongoing and that information could be revealed in the near future.