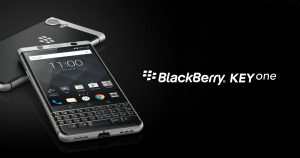 BlackBerry KEYone is set for launch on May 31 in the United States and Canada. The newest BlackBerry phone will be sold at Best Buy stores and also on Amazon. It will cost $549.99 and all the models will come unlocked. The smartphone was first unveiled earlier in the year during the Mobile World Congress in Spain. It has been manufactured by TCL Communication, a device manufacturer headquartered in Hong Kong.

“BlackBerry fans in the U.S. will be extremely excited to have the BlackBerry KEYone available in their market. Anyone who is an Android loyalist and values the mobile security and productivity that BlackBerry software brings will love this smartphone,” said general manager and vice president of BlackBerry’s Mobility Solutions, Alex Thurber.

In the United States there will be two variants of the unlocked models available. One of the variants will support carriers using the GSM system and this includes T-Mobile and AT&T. The other variant will support the CDMA system which carriers such as Verizon and Sprint operate. At Sprint, however, carrier availability will begin in summer.

In Canada the KEYone will be sold by a couple of carriers and will be offered with certain plans. Carriers such as TELUS, SaskTel, Rogers, Bell MTS and Bell will sell the smartphone online or in their stores. The prices of the smartphone when it comes with a carrier plan that runs for two years will begin at C$199. For an unlocked model the retail price for the KEYone will be C$729.

One of the notable features of the KEYone is its relatively long battery life by smartphone standards as users don’t have to charge it for as many as 48 hours. The battery life is as a result of using a chipset which is not as battery draining – the Snapdragon 625 as well as a 3505mAh battery.

The dearth of apps for BlackBerry has long been a problem that has plagued the brand for years but since the KEYone is running on Android 7.1 Nougat, users will have access more than one million apps on Google Play. BlackBerry Hub, an app that brings all messages including emails, SMS, social media account messages, WhatsApp, and Telegram and displays them in one consolidated place is likely to be a favorite with diehard fans of the BlackBerry.

The touch display of the KEYone is 4.5 inches and is made of Gorilla Glass 4 which is scratch and impact resistant thereby ensuring durability and resilience.